Vegas Vic, the 40-foot-tall neon cowboy, has towered over the old Pioneer Club on Freemont Street in Las Vegas, Nev., since 1950.

Featured in countless movies and commercials, Vegas Vic has been described by the Las Vegas Sun as “one of our city’s most recognizable icons, ranking alongside Wayne Newton, Siegfried & Roy, and the ‘Welcome to Las Vegas’ sign on the Strip.” With his voice box intact – despite a half-century of chain-smoking – Vic has been known to startle visitors with his “Howdy partner! Welcome to downtown Las Vegas” greeting. 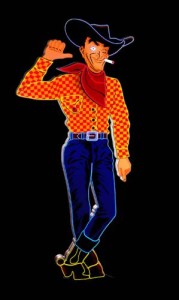 Vegas Vic, a true Las Vegas icon, has been included in the new marketing communications campaign introduced by 3A Composites USA and entitled, “It’s What Legends Are Made of – Create Your Own.” This program features a series of print advertisements, product literature, sample kits and a trade show booth in which legendary graphic arts icons – such as Vegas Vic – are recreated with one of 3A Composites’ leading graphic display boards, including those in the Sintra®, Dibond®, Gator™ and Fome-Cor® board lines.

The “Legends” campaign was developed for 3A Composites by McLane & Company, a full-service marketing communications firm based in St. Louis.

Vegas Vic, a somewhat weathered cowboy, underwent a major refurbishing in early-2000; and, 3A Composites USA did some renovating of its own when recreating Vic out of legendary Gatorfoam®, the solid choice foam board. 3A Composites’ 6-foot-4 Vegas Vic display was created utilizing a wide range of processes that showcase the versatility of this original heavy-duty graphic display board.

“Vegas Vic has been a legend in Las Vegas since 1950, and Gatorfoam has built a legendary reputation of its own for its high structural strength, durability and light weight since it was introduced to the graphic display market in 1976,” said David Meacham, marketing manager, 3A Composites USA. “These two legends seemed perfectly paired. In creating our Vegas Vic display, we were able to demonstrate a variety of fabrication methods on the various thicknesses of black and white Gatorfoam, including direct digital printing to the substrate, router cutting, vinyl application, airbrushing and screen printing.”

Gatorfoam consists of polystyrene foam bonded between two layers of Luxcell® wood-fiber veneer. It offers high structural strength and durability and may be used in outdoor applications.
(Follow manufacturer’s directions.) Gatorfoam’s new bright white facers produce eye-popping graphics in both direct digital printing and screen-printing applications. Gatorfoam is available with both white and black facers and cores in seven thicknesses ranging from 3/16 inches to 2 inches. Standard sizes include 48-inch by 96-inch sheets and oversized 60-inch by 120-inch sheets for large-format applications. 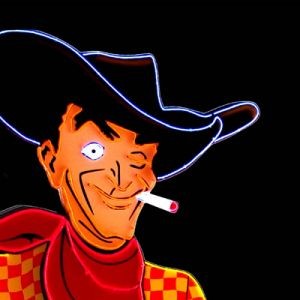 Engraphix Architectural Signage, Inc., in St. Louis, which has created several displays for 3A Composites’ “Legends” campaign, also managed the design, development and fabrication of the Vegas Vic display.

“When we were asked by 3A Composites to recreate Vegas Vic, our overriding goal was to use as many different processes as possible on the Gatorfoam,” said Ed Brimer, president of Engraphix. “Gatorfoam really lends itself to displays. It offers good stiffness in a substrate and a clean, white surface for printing. One of the newer processes that we utilized was digital direct-to-substrate printing. Companies with this type of printer capability are really utilizing this process. It really opened my eyes to the speed and high quality of direct printing on Gatorfoam.”

Craig Jakubs, owner of The Show Doctor Graphic Design in St. Louis, was hired to develop the Vegas Vic display artwork. His greatest challenge was to find images of Vegas Vic for scanning and enhancement with Adobe Photoshop.

“There are very few images of Vegas Vic available,” said Jakubs. “I did some research on the Internet and found a few shots. One from the late 1940s – when they were building him – showed his airbrushed head. Other images were skewed or from an angle. … I was able to manipulate these images in Photoshop to get the basic outline and pieces in sections.”

Through a fortunate turn of events while completing this project, Jakubs found himself in the Las Vegas airport on a layover from a business trip to California. He took the bus downtown and shot his own images of the real Vegas Vic. 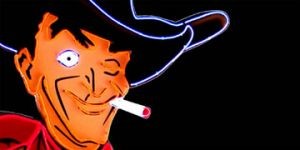 Jakubs incorporated both Vegas Vic’s nostalgic original look and current refurbished look in the display. For example, the display’s blue dungarees resemble those from the original job, while the checkerboard-patterned Western shirt belongs to today’s refurbished Vic.

“The Gatorfoam printed the first time really true,” said Torretta. “It offers enough rigidity and lays true and flat. It’s great for foam board printing. It also cut very well with i-cut software and the router bit – just like butter.” 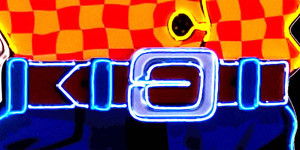 As a finishing touch to Las Vegas’ famous neon cowboy, Engraphix employees outlined the Vegas Vic display in GLOWIRE electroluminescent wire (commonly called el wire or el cable), which glows when attached to a power source. Metal grommets were first inserted on the display’s silhouette. The GLOWIRE then was strung between the grommets and attached to the display with hot glue. 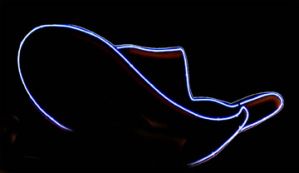 As for the end result, Jakubs offers a somewhat biased opinion. “Our Vegas Vic display probably looks a little better than the real one,” he said. “We did him proud.”

Appropriately, the Vegas Vic display debuted in Las Vegas as part of 3A Composites’ booth décor at both the GlobalShop 2005 and International Sign Expo 2005 trade shows held there. His next appearance is scheduled for SGIA ’05 to be held in New Orleans Sept. 28 through Oct. 1.

Fabrication specifications for each icon, including Vegas Vic, are included in the “Legends” print ads. Additionally, new literature pieces entitled, “Choosing Your Graphic Display Board Is Easier Than Ever,” provide product information as well as fabrication and application guidelines for each graphic display board available from 3A Composites USA. To request complimentary literature or additional product information, call 1-800-626-3365 or email info.usa@3acomposites.com.